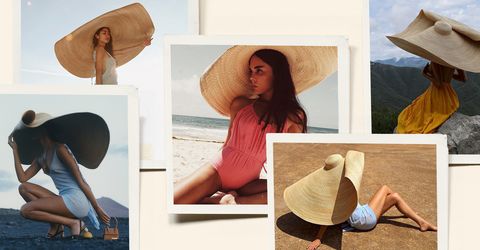 Until June, “hat drama” was for drunk uncles at Thanksgiving, defiantly sporting their MAGA hats during dinner. But for Insta-famous models and a certain French designer, red baseball caps are for amateurs. The real story starts in Paris, as model Amilna Estevao wears a giant straw hat down Jacquemus’ Spring / Summer 2018 runway.

Called La Bomba, it’s a massive accessory—over a foot high and nearly two feet wide—that’s striking, easy to wear, and very expensive. It is, in other words, an Instagram dream, with over 200 images for the tag #JacquemusHat, another thousand or so floating on the #Jacquemus tag, and—I cannot make this up—its own fan art on Tumblr.

Re-gram appeal isn’t the only reason this massive hat won this summer’s style wars. Rihanna, Jessica Chastain, and lots of naked models helped push it along to victory, too. But it was a case of mistaken identity, starring Bella Hadid and Diet Prada, that really pushed the hat’s exposure over the edge, making it the most-hyped accessory in a summer of Supreme drops.

Here’s a rundown of how the La Bomba hat achieved its ultimate glory—consider it a cheat sheet for future Instagram #goals.

Step 1: Put It On Repeat

Andy Warhol said, “life is just a series of images that change as they repeat themselves.” Jacquemus designer Simon Porte might agree, since his Instagram is one long copy/paste. He posts each photo three times in a row, meaning every shot of La Bomba had 3x the chances to land in our timelines. With 123 posts in the span of 11 months, that hat appeared on our feeds about 10 times a month since September. Whew.

Rihanna, Ariana Grande, Jessica Chastain, and Emily Ratajkowski wore the La Bomba hat in major photo shoots, with @theblondesalad, @garypeppergirl, and @styleheroine endorsing it, too. If you believe in influencer marketing, La Bomba got it done.

Last year was all about the naked dress. This year, let’s just get naked—especially on a beach in the French Riviera, wearing a giant Jacquemus hat (and hopefully SPF 10000). Anja Rubik led the pack, but babes from Mykonos to Miami were setting similar thirst traps, inspired by the designer’s own campaign.

Speaking of thirst traps, let’s discuss Bella Hadid. After she appeared in nothing more than a giant straw hat, Mr. Porte posted the bombshell’s photo on his Instagram as yet another La Bomba triumph. The problem? The hat was actually made by Olmos & Flores, a design duo from Mexico City.

The fashion blog Diet Prada astutely spotted the French designer’s faux pas, praised the O&F hat’s local Mexican craftsmanship and wrote, “We’ve seen this happen before–a brand with more power and hunger for a major credit swoops in and steals the opportunity from a smaller brand. It just so happened that Jacquemus had already created THE hat of SS18, so any giant hat could rightfully be his, right? Nope. When you’re the industry’s current darling, you can try….but, you can’t always have it all.”

How did Jacquemus respond to the site’s rebuke? By claiming “FAKE NEWS” on Instagram stories. (How…Trumpian?) This sparked a comment war between their fan squads, a few bemused news stories, and a tea-soaked Instagram story aptly called #HATGATE. It also made the La Bomba hat even more visible to style addicts.

Despite the truth that Bella’s hat came from Mexico, not Marseilles, #HATGATE helped push La Bomba past its tipping point. The hat’s since sold out at Net-a-Porter, Moda Operandi, and My Theresa, though Jacquemus.com continues to restock when possible. Bella’s palapa hat is still available, too, for about 6500 pesos―or $340 (around half the price of the Jacquemus hat).

<i>Xo, Kitty</i>: Everything We Know About the <i>To All the Boys I’ve Loved Before</i> Series
A Complete Timeline of Kourtney Kardashian and Travis Barker’s Relationship
Meghan Markle Gets Personal in Letter Urging Congress to Pass Paid Leave for All Plan
Hailey Bieber Puts an Edgy Leather Spin on the Little Black Dress
Here’s Kendall Jenner Posing in a String Green Bikini and a Pink Cowgirl Hat