Jeremy Scott, Moschino’s creative director, has taken fashion innovation to a whole new level in 2020. In a year where gathering models for a runway show is a health hazard, Scott decided to debut his Spring 2020/2021 collection on puppet-models created by Jim Henson’s Creature Shop.

Here are a few examples: 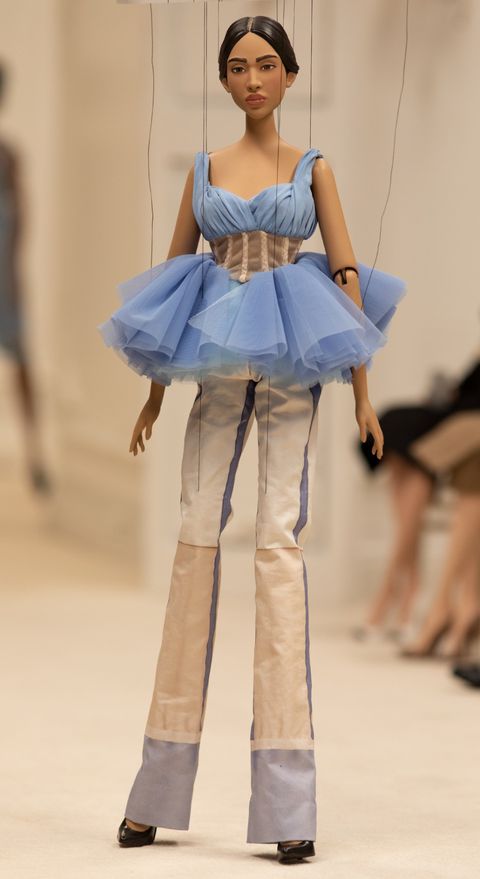 The clothes reflect 2020 even further in their design: “Edges, seams, corsetry boning, panels, darts, trims, and more” show up on the clothes, Moschino shared in a press release.

The press release says that Scott’s collection was inspired by the kind of upside-down year we’ve had (in my words; 2020 is a garbage fire):

“In short order, the world has flipped,” the press release reads. “It hasn’t capsized, but we are certainly living in the upside down, inside-out. The topsy-turvy. Everything is surreal but somehow also too real, altogether, all at once. It’s a recognizable place, but it feels foreign, alien, and admittedly, unnerving. Yet through this paradigm a revolutionary rulebook will be written. The old manual will burn. It is burning. We won’t call it a fresh start so much as it is a new start. Inner-workings are being laid bare; how these mechanics exist and evolve will change. In this respect, Jeremy Scott’s Moschino Spring/Summer 2021 womenswear collection takes these inner-workings—which, typically speaking, have been kept hidden and unaddressed—and brings them forward. In 2020, the apparatuses of what we know have been largely exposed. Scott has chosen to reflect this phenomenon, and to build from it.”

As ELLE.com reported this past June, the fashion industry is severely changing in the face of this global pandemic. Michael Kors, Giorgio Armani, Alexander Wang, and more announced they were going to either going to skip fashion week this year or go a different route than the traditional runway shows. It seems Moschino has topped the list when it comes to creative pivots during this…garbage fire.

This is no shocker coming from Scott, who appears in puppet form in his show.

How To Watch US Women’s Gymnastics Compete In The 2021 Tokyo Olympics
Are You Over Normcore? Meet Its Fancy Sibling, Regency-Core
<i>Never Have I Ever</i> Season 3: Here’s What We Know So Far
How Old Is The Cast of Netflix’s <i>Outer Banks</i> Now?
Ayo Edebiri Has No Problem Staying Humble