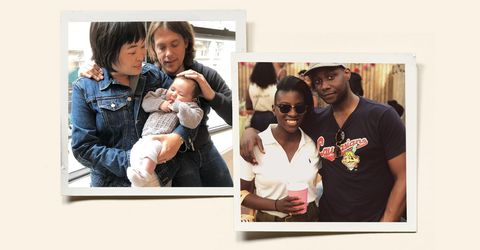 New York Fashion Week is upon us, and in between the events, presentations, runway shows, and copious amount of dad sneakers, there are also real people working to maintain their real lives and their real relationships. To find out what goes into juggling a partnership during such a hectic time, ELLE.com spoke to five fashion editors and their significant others to find out what changes, what stays the same, and just when they find the time to see each one another.

While Nikki Ogunnaike, ELLE.com’s style director, and her boyfriend of four years, Philippe, don’t live together, their home lives do change during this time of the year. Philippe admits he’s obsessive about clutter, and Ogunnaike’s fashion week apartment tends to veer toward the messy. “During fashion week, Nikki has to put together interesting looks and sometimes multiple looks in a day,” he says. “So I will go to her house, and there will be clothes, empty hangers, and dry cleaning bags everywhere. When we first started dating, I used to chastise her about it, but now I try to help by picking things up and making the mess a little more organized.“

The two—who usually have packed schedules—also switch up their date times so they can still see each other. On Sundays, they normally go over their schedules for the week to find times they’re both free. Though they do the same during fashion week, Philippe says Ogunnaike’s evenings are normally booked, so he adjusts his schedule to be available in the mornings: “We try to eat breakfast together before she has to attend her first show/event.”

It’s a different approach to when the two first started tackling fashion week in 2014; Philippe says it used to bother him when plans would get modified at the last minute, “like when I had to sit outside of the Alexander Wang show for 75 minutes because the show didn’t start on time.” But now, he says, he tries to be flexible and compassionate: “Fashion week is stressful enough for Nikki, so I like for her to see me as a respite from that stress.”

Putting It In Perspective

Aya Kanai, the chief fashion director at Cosmopolitan, Women’s Health, Seventeen, Good Housekeeping, Redbook and Woman’s Day, makes sure to start her preparations in advance by ensuring her husband, Todd Bailey, and her baby have enough clean clothes to make it through the week before shows even start.

Bailey does most of the food buying and cooking, but says he normally stops during fashion week since Kanai doesn’t eat at home as much. He also admits that most of the other chores cease as well.

But even with all the craziness, Bailey says he’s just thankful for the moments they can be near each other. “We’ve been together a long time, and we both travel a lot for work, so I’m grateful just to be able to wake up and go to sleep together. There are lots of other weeks in the year,” he says.

That balance between family and work is important to Rajni Jacques, the fashion director at Allure and Teen Vogue. While her husband David Dowd ends up getting more interaction with their son Diego during fashion week, she tries to make sure she spends time with the family, and her husband also texts and calls her “every second.” “I also invite him to certain events so we can spend time together,” she says. The two have been together since 2002, and she’s been doing fashion week for at least 10 years, so their approach has definitely changed. “Before it was just the two of us, and he would come to a lot of things with me. It was cool having a partner in crime at events. But now it’s different—we have a more robust life, so we have to prioritize.”

For Dowd, that means not always tagging along to the festivities: “…where in the past I’d sometimes tag along [for] hors d’oeuvre and open bars… as the years have passed, I’ve become more content to stay home. And now that I have Diego at home, it is not even up for discussion.”

It’s a similar situation for Kerry Pieri, the fashion and features director at BAZAAR.com, who now balances her work obligations with taking care of her one-year-old, Lila. Normally, she tries to get home around 6 P.M., but fashion week makes that a little more difficult; instead she tries to get home for dinner and then heads out to a late show or event. “The apartment can definitely get a little ‘bombed’ with clothes… so [her husband] Steve (and Lila) do a great job helping me keep things organized,” she says. And those missed moments are often replaced with a surprise lunch, afternoon coffee, or meet-up in the park, when she can stop home in between shows.

She says her husband was pretty used to her “disappearing act” when they were just dating—they’ve been through about 10 years worth of fashion weeks by now—but things have definitely gotten harder now that there’s a baby involved: “Those marathon brand dinners are a non-starter now.”

Getting In Some FaceTime

Diana Tsui, senior market editor at The Cut, admits that, during fashion week, she normally sees her husband, Chris Wu, in the morning before she leaves and for about 10 minutes before bed every night. While they do text throughout the day, once she heads over to Europe, she avoids texting due to the time difference and instead tries to FaceTime before going to bed.

“We both know it’s a busy time, and we’ve been together so long that I don’t think we necessarily miss each other,” she says. “I will say that Chris does try to make sure there’s some sort of food or takeout at home just in case I don’t get to eat dinner.“

The two have been through 10 years worth of fashion weeks—and at this point, everyone in their lives knows Tsui is MIA every September and February—but the biggest change came when Tsui first started going to Europe; Wu had to fend for himself and now makes plans to go camping with friends while she’s gone.

The Woman Behind Savage x Fenty’s Jewelry Has a Fascinating History
Exclusive: Precious Lee, Meadow Walker, and More Model for Zara’s New Studio Collection
Selena Gomez Offers An Exclusive First Look at Sephora’s Anti-Bullying Campaign
Coach’s New Collab with Jennifer Lopez Is “Wearable, and a Little Bit Glamorous”
How to Have a Hot Girl Fall, According to Haim