In July 2019, I tasted dal, the South Asian equivalent to chicken soup, for the first time in four years. The red flat oval lentils, eerily similar to the microscopic imagery of the red blood cells that my anemic body lacked, floated in a spiced broth that thickened after cooking for hours in a metal cauldron.

During my dal-less years, I had begun demonizing food, to the point where I was diagnosed with anorexia nervosa. The dal I ate that day was made for me at Monte Nido, a residential inpatient treatment house for adults in recovery from eating disorders on the North Shore of Long Island. I did not have kitchen privileges, so I was not permitted to enter the area or even peek inside, but if there was any one with the power to override authority, it was Alyson Crispi, Monte Nido’s 46-year-old head chef, a Long Island native.

Chef Aly, usually guarding the kitchen with her life, ushered me inside her workspace one day, where she brewed concoctions with healing powers: quinoa salads and paninis with thinly shaved pears, a honey drizzle, and smear of creamy peanut butter. “What spices do you taste?” she asked me, holding a ladle of dal to my mouth. My reflex was to jump back. After almost dying of malnourishment and severely low body weight only a month before, the last thing I wanted was extra calories. But then I tucked that irrational thought into the back of my mind and leaned forward. As Chef Aly spooned the hot aromatic dish into my mouth, I felt like a contestant in a reality cooking competition, rattling off the spices—cloves, coriander, cumin, turmeric—that I could identify by smell and taste. 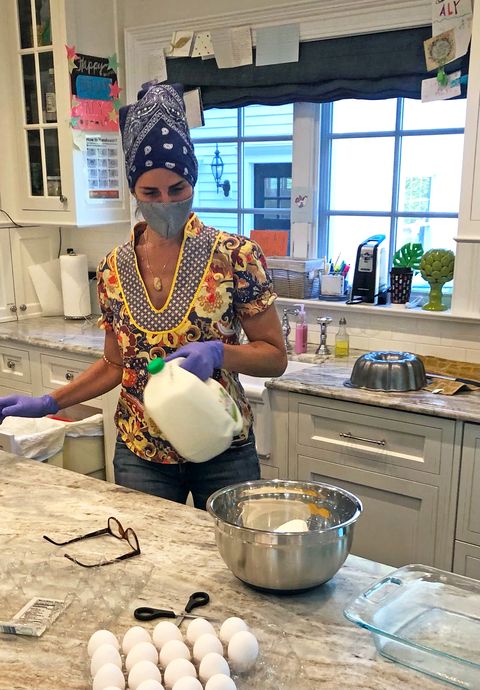 Chef Aly baking for residents at Monte Nido’s inpatient house in Glen Cove, NY. “I have been making my chocolate chip banana bread at least once a month—it’s everyone’s favorite menu item,” she says. “They smell it when I prepare it.”

Upon returning home from inpatient treatment in fall 2019, I believed I was in the tail end of my recovery. I had all the proof I needed to know that eating, frequently and in variety, drastically increased my quality of life, and that weight gain, which I still needed to pursue, was neither debilitating nor unsightly. I took pride in myself as gained over 30 pounds; I was filling out clothing, moving without feeling off kilter, thinking with clarity, and feeling something other than numbness. By following a meal plan and going to the gym, I was beginning to feel confident in knowing how to eat and move again.

But the second week of March 2020 everything changed. For many, the pandemic resuscitated the romanticized concept of the kitchen as the heart of the home, but for me, it blocked my steep uphill path to recovery from near-fatal anorexia nervosa. As people were encouraged to shelter in place at home, the kitchen became my battleground. Even achieving the perfect pantry became impossible as my go-to “safe foods”—items I knew the nutritional information about and had eaten enough times for them not to stir up anxiety—were being snatched up in last ditch efforts to stockpile food in the event of a shortage.

Without weekly weigh-ins, meetings with my therapist and physician, and occasional check-ins with my registered dietician who works full-time in one of the hardest hit hospitals for admitted COVID patients, I was forced to trace back how I originally began to heal my relationship with food. 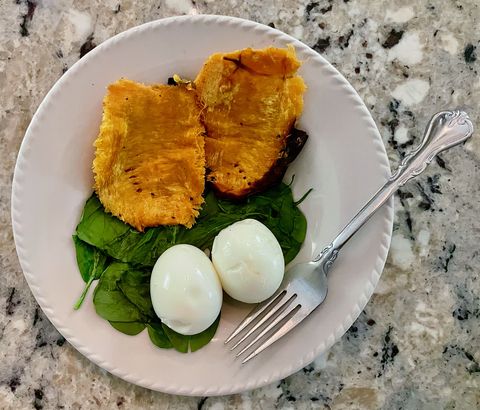 Two soft-boiled large organic eggs and a roasted hannah sweet potato over spinach, one of my go-to lunches.

I thought back to my time with Chef Aly and the others who cooked for us at treatment—the people who gave us the chance to literally feed our eating disorders into dormancy. These chefs are never publicized on television, nor credited with any part in eating disorder treatment, but they and the food they heal us with—its taste, texture, temperature, and the nourishment it provides—feel just as essential to recovery as the dieticians, physicians, and therapists.

Chef Aly told me she was inspired to heal through food by the woman her parents hired to cook for her grandmother, who had cancer, when she was in fifth grade. In 2001, she attended The Natural Gourmet Institute in New York City, a culinary arts program focused on cooking for those with illnesses and promoting wellness via nutrition. After graduation, she cooked professionally as a private chef for wealthy people with medically prescribed diets, before joining Monte Nido’s Glen Cove location in April 2019. Chef Aly says the job was “divinely inspired,” and she jumped at the “opportunity to cook for people’s wellness.” Though she hasn’t suffered from an eating disorder herself, Chef Aly says she’s not immune to diet culture. “I have been exposed to all these different fad diets, have seen friends and family dabble in them.” Since working at Monte Nido, her mantra is, “I can give what I want to my body. It’s completely ok.”

At treatment centers, emphasis is placed on the principles of Intuitive Eating. This philosophy asserts that food is not only fuel—its consumption simply a means to an end, the quelling of hunger pangs—but that it can be used to comfort, satisfy, and promote socializing. “The cuisine here is all about Intuitive Eating,” Chef Aly says. We were given snack menus and told pick three a day, based on what we wanted to experience. There were sweet options, like milk and cookies, as well as savory offerings, like wheat crackers with string cheese. 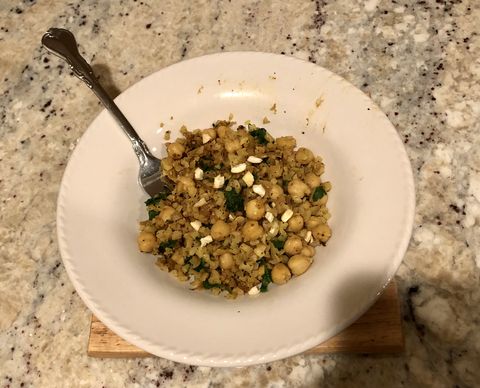 One of my first attempts at cooking in the kitchen after returning home from Monte Nido in September 2019. It was my rendition of the Moroccan quinoa bowl, a favorite dish prepared by Chef Aly. Still struggling to combat fear foods, I swapped the quinoa for riced cauliflower.

At the beginning of my recovery, I obsessed over new flavors and used cooking as a form of therapy. My favorite new recipe—the first dinner I ate at Monte Nido—was a Moroccan spiced quinoa medley with dried currants, slivered almonds, and garbanzo beans. But during the pandemic, I became apathetic to food. With the universal upheaval from a looming election and an airborne virus, I no longer had the mental hunger or curiosity for rediscovering flavors and textures. This apathy, combined with my ability to ignore hunger and fullness cues from years of resisting my body’s needs, made it easy to feed my eating disorder. I started starving myself again, controlling my energy intake and exertion in order to cope. I knew I wanted help, and a year into the pandemic, contacted a former Monte Nido recovery coach, turned licensed therapist for therapy twice a week.

I also reconnected with Chef Aly, who picked up on my renewed aversion to eating right away. Before I found her, I was constantly on the receiving end of unwelcomed and non-applicable advice from family and friends on how to eat. (One advice-giver went so far as to suggest I eat the exact same foods as they did ‘until I learned how to fend for myself.’) Chef Aly reminded me of how I coped at treatment when I was jolted by a new variety of granola or surprised with Oreos instead of my chosen protein bar at snack time. “Think about the real world: Brown Sugar Pop Tarts are out of stock at the supermarket—you need to decide what you’re going to pick up instead,” Chef Aly said. Being able to make that decision is part of the recovery process, she told me.

I am still working toward that now. “A lot of recovery is about being able to eat freely,” says Dr. Colleen Reichmann, a licensed clinical psychologist specializing in eating disorders. And while I continue to struggle to cook without measuring, to eat the amount I should, and to participate in family-style meals, it is in the kitchen that I can see the woman I know I can become. A woman who lusts for aromatics and strong flavors, the tingle of spices on her tongue. 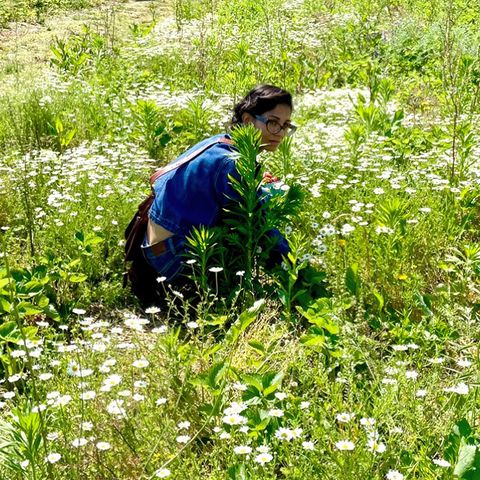 Strawberry-picking out east in the North Fork, Long Island on opening weekend, June 2021. Picking produce on the farm is one of the ways I try to practice mindfulness and ground myself since being diagnosed with anorexia in 2015.

Chef Aly was the first person who extended her hand to me and brought me into the kitchen. Though I haven’t tasted dal since that July day, I still smell hints of it when my mother cooks. And when those flavors hit my nose, I can see the healthy woman I was becoming under the guise of Chef Aly and the healthy woman I can still become today. So until I am at that point in my recovery, I will stay in the kitchen because as long as I can see her, I know that someday I can be her, too.

The Best Designer Deals (Including Prada and Burberry) from Nordstrom’s Anniversary Sale
Beautycounter Just Released A New Talc-Free Makeup Line
All About Jade Carey, the Elite U.S. Gymnast Competing At The 2021 Tokyo Olympics
God is Both a Woman And an Incredible Fragrance
Shelf Life: Katie Kitamura