The first pronghorns appear in the meadow in June—three adults and two twig-legged newborn fawns, all of them the same tawny gold as the wild grasses they lounge in and graze, with crisp white patches on their cheeks, throats, chests, and bellies. They’re watching me with their binocular vision, ready to run at the slightest threat. I’m the threat. With COVID-19, everyone is. We’re all on edge these days. I’m trying to tread carefully, make space; when they turn and bound away, I’m just grateful to have glimpsed them. Last summer’s pronghorns moved through swiftly, here and gone in a day or two. But it turns out this new family is here to stay.

And so am I. Any other June I might not have been. Frequent travel arranged and defined my entire adult life— for love, for work, for family, for joy—until lockdown hit and all my itineraries dissolved, along with the future I thought I knew. As the human-built world went into hibernation, I woke up, blinking, into the other worlds around me, where I am just another animal. I step out of my home into thousands of other homes.

For years I lived in the hearts of cities and thrilled to that rapid pulse, but now I live at the edge of a meadow surrounded by miles of ponderosa pine forest, under a night sky so dark you can see the blur of the Milky Way overhead. Quarantine has taught me that if you stay put, continually paying attention, you find the magic of both the familiar and the new. Time unfolds in countless different scales around you, from the geologic time of rock formations to the long, slow lifespans of trees to Mars’ return to the night sky like a distant orange porchlight. The meadow floods with spring melt, ephemeral lakes and streams appear, and when the water sinks back into the earth, tiny sweet wild onions shoot up from the rich silt. Wildflowers burst into bloom. From the woods, my dog retrieves evidence of fresh deaths every day—coyote jaw, elk rib, sheep skull, fawn hoof, crow wing. And then the baby elk and deer and pronghorns traipse into view and I feel the same wonder and fierce tenderness for them that I did for the little human kids who grew up on my urban block. 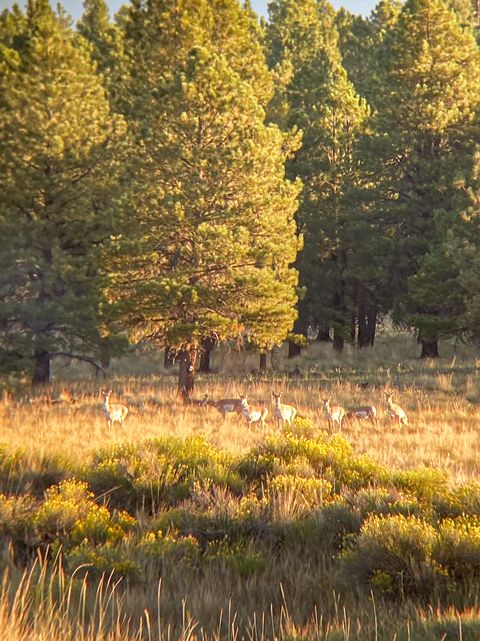 A herd of pronghorns near the author’s home.

One morning in July the pronghorn fawns are gone, and my heart stops. A few adults stand out in the meadow, but no babies; not even my binoculars can find them in the tall grass. For days I’m depressed about this, especially after searching “pronghorn fawn mortality rates,” and I realize how much hope I’d hung on their little golden shoulders. I’d thought lockdown would last two weeks, then maybe two months at most, and now we’ve hit the point where the pandemic’s tenacity is dreadfully clear. When the fawns go missing, the weight of everything feels worse. If only they’d held on a few weeks longer! Pronghorns are the second-fastest land animal in the world, able to run 60 miles an hour, Ice Age survivors who evolved to outrun far more formidable predators than our coyotes and cougars. They beat extinction itself.

And then one morning I rise with the sun and open the front door and catch movement in the meadow. Six pronghorns are moseying through the grass, closer than I’ve ever seen them, and among them, both fawns. I run inside and wake my partner, KT. “They’re back! They survived!” Maybe that means we will too.

The pronghorns linger all summer. They only appear early and late in the day, disappearing into the trees the rest of the time, and I retrain my gaze to find them in the distance. I’m also learning to look up, for birds and clouds, and down, kneeling to read the ground. I find tracks and signs, the neighborhood gossip: the fat parentheses of elk prints as big as my own sneaker, the pointy wedge of pronghorn tracks, the twist of coyote scat, fluffy gray hawk pellets studded with tiny mouse bones, an explosion of orange feathers where a northern flicker met her fate.

Quarantine has taught me that if you stay put, continually paying attention, you find the magic of both the familiar and the new.

I find, to my growing anger, the damage of human incursion, too. From the original sin of forcing Indigenous people from this land to the present-day scourges of extraction and roughshod tourism, you cannot find an American wilderness that people haven’t fucked up—and in the pandemic, traffic soars. I find bullet shells, used toilet paper, busted toys, snack trash, booze bottles, tires, drug vials, an entire abandoned trailer, a smashed television. Gunshots ring out regularly, and we find pine trees perforated with bullet wounds, oozing thick swells of pink-white resin that will harden to amber scars.

But I also find a badger hole with a badger in it, to our mutual surprise. I find gorgeous hidden ravines and rock outcroppings with views for miles. A porcupine climbing a tree looks exactly like a small person in a porcupine suit. The same hawk reliably assumes her post on a magnificent dead tree. In the evenings we can smell the elk, musky and rich, before we see them. As the pronghorn bucks’ horns grow glossy and tall, the herd becomes seven, then nine.

The first week in September, walking the dog, we see a flash of blaze orange in the meadow. It’s a man, kneeling. A tripod, I think at first, because all I do out here is photograph. I raise my binoculars and see that he’s fitting an arrow into a bow. And he’s training it at the pronghorns, whom I hadn’t even seen at the edge of the trees. They break into a run. I do too.

“Leave them alone!” I yell, running and trying not to stumble across the clustered grasses. “Don’t shoot!” 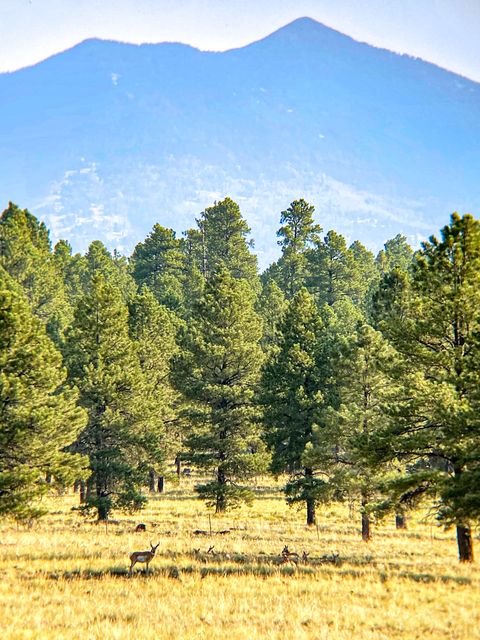 I expect him to yell back or threaten me, and I don’t care. But the man looks over at the ridge where the sun has just disappeared, stands up, and strolls away to his truck. The pronghorns have vanished. Shaky-kneed, I walk back to KT and the dog. Did I do that? No, it turns out, it was the sun. He was following the rules: no hunting after sundown.

Hunting season was an option that had not even crossed my mind. Another thing to dread and fear, and nothing we can do to stop it. I lie awake all night, get up at dawn, and stalk out into the meadow to do…anything. If the pronghorns are there, I’ll chase them into the trees. If a hunter is there, I’ll ruin his shot. But no one’s there. I can’t save anyone.

By the end of the week, seven pronghorns remain. The two bucks with the tallest horns are gone. The fawns, now adolescents, have survived. The herd hangs around a few more weeks until our mountain autumn turns frosty and they migrate to lower, warmer places. Travel is still their way.

And one day it may be mine again, too, but my year at home has changed me. I suspect I loved travel so much because I can hardly bear the fact that I only have one life to live, and exploring new places or returning to old haunts gives me the illusion I can transcend time, diverge into an alternate present or reanimate my past or imagine an unexpected future, then merge safely back into my real life, and repeat. I think that’s also why I write. Staying still, I’ve had to fully inhabit the one life I do have. To recognize not only its precious limits, but its tenuous, temporal place among all these other lives, no more or less marvelous. I am a guest in this land, and in this body, I am lucky to call home.

This story is part of ELLE’s Lost and Found: One Year in Quarantine. Click here to read all the stories in this package.

Chelsey Johnson
Chelsey Johnson is the author of the novel Stray City and directs the MFA in creative writing at Northern Arizona University.